As part of London Technology Week last week, I attended the VR & AR World Summit at ExCel in London hoping to see what the hardware providers were up to as well as gleaning info on where the tech is typically being deployed and typical use cases.

Disappointingly neither Oculus nor HTC were present so although their hardware was on show, as it was being used, there wasn’t anyone to discuss their roadmap or current hardware. HP were there demonstrating their VR headset as well as their “Z VR Backpack”. Whilst I appreciate the backpack is a solution to providing substantial computing power whilst allowing VR users to be mobile I can’t see it being an easy sell when compared to the likes of the inexpensive, ultra-light Oculus Quest – albeit I do understand that it’s for a different market and use. 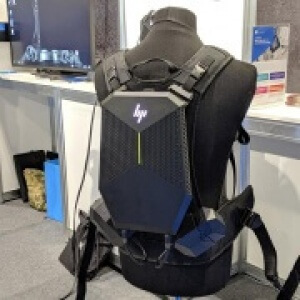 Microsoft were on hand rather bizarrely pushing their AI offering with freebie ice-cream whilst also having their HoloLens 2 AR Headset on display. Whilst HoloLens 2 is without doubt a leap forward for Microsoft the pricing model is prohibitive for wider adoption. Yes, it may make sense in a training or support situation where the cost of shipping in an engineer or mistakes being made means that it will recoup its cost very quickly, but for scenarios like education where I think this could make a massive impact the price per unit is well beyond the reach of a typical school budget.

Of course, until such time as we can project actual holograms, we’ll be stuck with the scenario of everyone having to have their own device, or access to one provided. Talking of holograms (slick segue) my own personal favourite stand at the show was Valorem’s demonstrating their HoloBeam – “real-time holographic telepresence technology”. In effect this technology streams a volumetric video using a Microsoft Kinect and what appeared to be a pretty standard webcam. Technically speaking it isn’t a full volumetric video as it’s only capturing the front face of the video but impressive, nevertheless. This stream was being demonstrated on a HoloLens so I had myself and Rene (Valorem’s Innovation Director) floating as live streaming 3d “holograms” on the HoloLens. Not only that but the 3D capture was simultaneously displayed on a glasses-free 3D display from Looking Glass Factory which, although relatively small, is without a doubt the most amazing glasses-free 3D display I’ve ever seen. The result in a busy environment with lots of movement all around had a slightly glitchy sci-fi effect but considering what it was doing live was still quite a feat.

Another vendor who was delivering volumetric video was 4DVIEWS. Their VR video demo with full volumetrically captured characters was impressive although I think if they had used AR it could have been much more so. They were at the event promoting their Holosys volumetric video capture solution which appears to be a bank of cameras and software which you would use in a greenscreen studio environment to capture your assets.

Although probably not strictly AR nor VR Xperteye were demonstrating their Advanced Remote Solution on smart glasses – tricky to describe in a simple one liner but how about having a live human remote assistant. It’s kind of like phoning an engineer and showing them what you see via Skype but in a pair of glasses… sort of. 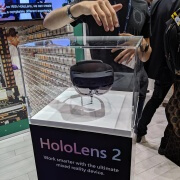 There were several other VR & AR production companies demonstrating content and offering their skills and services with an obvious bias towards the training sector – in fact overall I came away with the view that the majority of what was spoken about or demonstrated had a bias towards digital learning and training – especially effective when placing human beings in difficult or high risk situations, replacing this with VR delivers a similar learning experience but without the risk.

It’s still early days as the technology evolves and improves, while prices are likely to continue to drop the biggest challenge we face is to move the technologies beyond gimmick applications and into a long term sustainable XR ecosystem where users having AR enabled glasses becomes as commonplace as having a mobile phone.

To find out more about Multiply's AR and VR capabilities, get in touch.