Answering the call of Asylum Aid

The numbers are heartbreaking. Over 3000* migrants died in 2015 alone while trying to cross the Mediterranean. 350,000* made it, only to be faced with a highly uncertain future. Yet no number can create the same emotional response as the picture of a child in a war-torn land, or the tale of one young girl’s tragedy.

It’s an ageless truth that human stories, ones that we can feel a personal connection with, have the power to make a big impact. It’s why we’ve recently seen so many articles profiling the victims of terror attacks. If only for a few lines, they are more than just a casualty - they become individuals who are worth remembering.

Asylum Aid’s mission is to secure protection for asylum seekers by offering free legal advice and representation. Since a lot of their work is with the most vulnerable and excluded individuals, they take a highly personal approach to what they do. It can, however, be challenging to shine a light on these individuals’ experiences when it comes to raising awareness and donations. What is (sadly) such an ordinary experience in a refugee’s life is often too extraordinary to even imagine for people living in the UK.

Together with Red Brick Road, our task was to create a campaign that would create deep emotional engagement and understanding, raise the charity’s profile and ultimately lead to donations. The key was to go beyond the headlines and news stories to highlight the realities of a refugee’s world.

This would require a less conventional method. And while showing was better than telling, there was one even more effective method:

“Experiencing something for yourself is the best way to understand it.”

The challenge now was deciding on how to make that happen. The solution would have to be framed in a way that would make sense to those who had never experienced or even heard anything like what these people had been through before. In addition, whatever the chosen route was, it would have to be simple and clear. There would be no time to immerse users in the legal complexities and complicated politics and human rights aspects of the subject. That meant coming up with something that could start from the universal before delving into specifics.

In the end, it was the experiences of the people we were trying to help that provided the right answer. As part of their ordeals, refugees had often been forced to make some nightmarish choices. For instance, having to decide whether to convert and marry a complete stranger or have sex with one. Since life is a series of choices, this would be a powerful way to create a simulation. And even better, there was an existing format that was both popular and fit all the requirements.

“Confronting people with the impossible choices that face refugees everyday with the hardest ‘would-you-rather’ questions ever.”

However, the idea was to make it look nothing like charity content, but to disguise it as something entertaining. The quiz would start out easy, with pretty standard questions. Then, halfway through, the questions would get very dark, very fast. With quiz-takers lulled into a false sense of security, we would shock them with real-life refugee scenarios. This jarring shift would also mirror how quickly a refugee’s life could be turned upside down, with little to no warning. After putting our users in their shoes, we would then show them how they could help.

While the campaign revolved around the quiz, the various components around it needed to be well integrated. For that reason, we built a microsite with an easy to manage CMS, and connected the various functions like donations, sharing and further links in one compact place. The choice to house the quiz on a microsite also allowed for a compact, self-sustained experience.

Here’s more information and technical details on what we did:

The online quiz required naive users (users who were not informed or aware of what was going to happen) for its shocking midpoint twist to work. So we built a microsite that kept things under wraps, starting with a very innocent-looking URL; “would-you-rather-quiz.com”. To keep users in their comfort zone, we kept the quiz format familiar, inspired by similar content on BuzzFeed. To keep the mystery going further, the next question would only be revealed after a user answered by choosing one of the two answers. 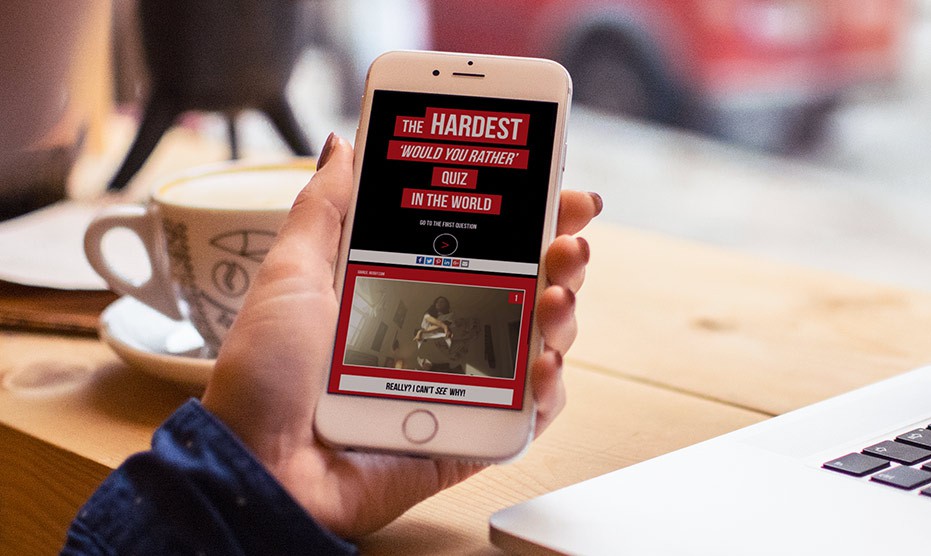 "The hardest would-you-rather quiz in the world", as it was called, obviously had to provide subtle hints as to where it was going in order to prepare the user psychologically. However, it also had to remain entertaining. A red and black colour scheme both allowed us to showcase the brand identity and give the quiz a more serious look. The whole site was designed to be fully responsive and mobile friendly. 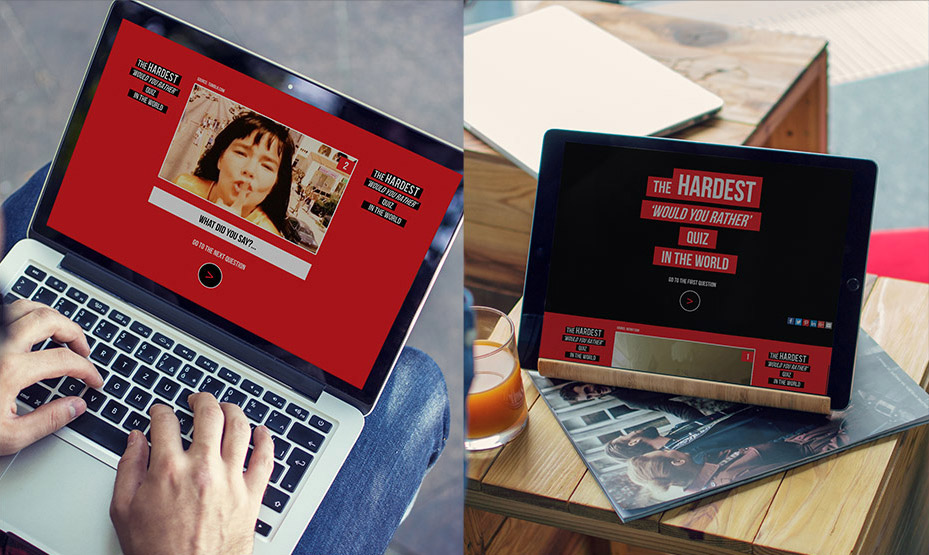 Asylum Aid’s objectives were twofold; to raise awareness about the charity and, ultimately, to gather donations. Ease of use was crucial in this regard. After all, it would be a wasted opportunity to lose engaged and willing users to technicalities. So we integrated a simple and secure donation tool to the end of the quiz. We also included extensive analytics and tracking so that Asylum Aid could learn from audience behaviours, and get even more efficiency and effectiveness in the future. 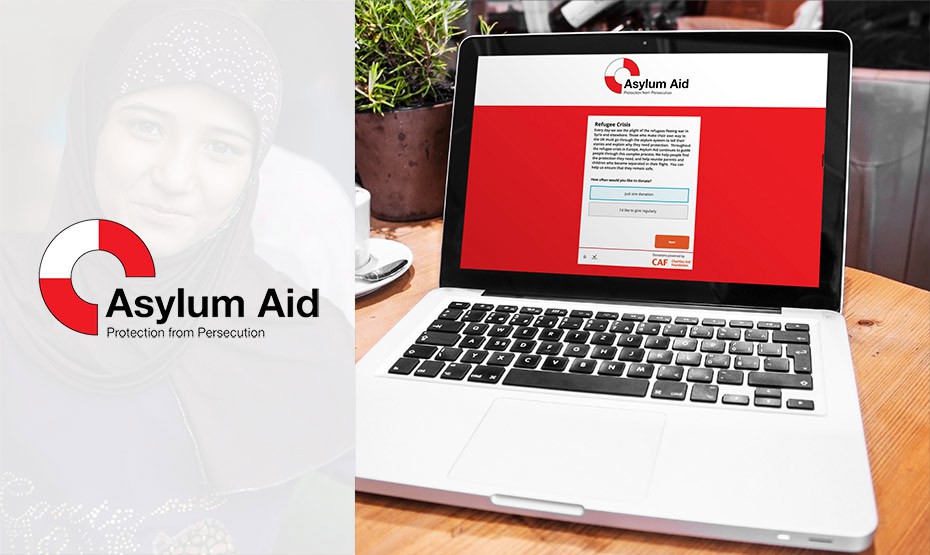 There was a significant amount of PR and marketing support for this campaign, not to mention the already high interest in the subject due to recent events. Our task was to make sure the quiz also caught fire on social media, the key medium for this type of content to create buzz and spread organically. By adding share buttons for Facebook, Twitter, Pinterest, Linkedin, Google+, we made sure users could quickly share the quiz with their friends, no matter what their preferred platform. 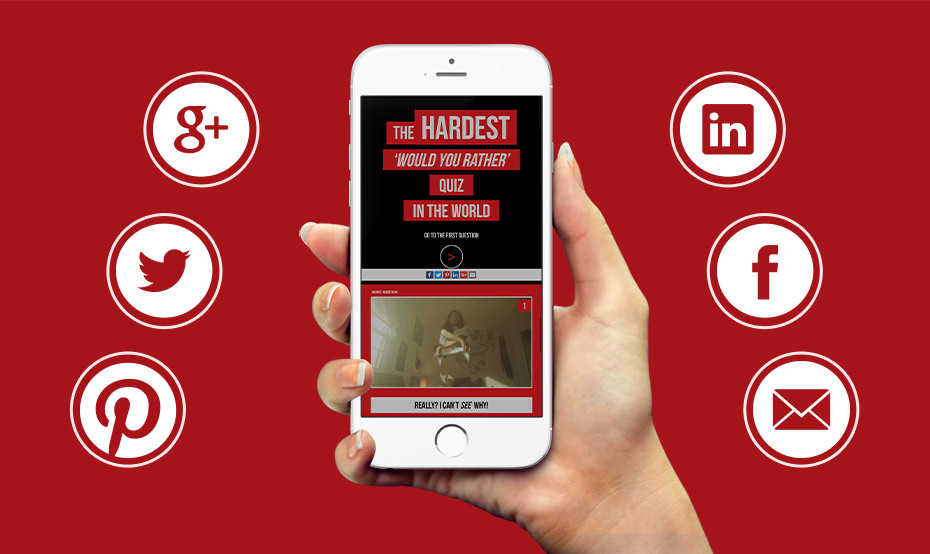 The campaign became so popular that it was picked up as a feature by The Independent, which was itself shared 204 times. But the even more impressive result was that, of the over 200,000 click-throughs, a quarter turned into donations. Not only did the quiz help change perceptions about the lives of refugees, it also led to substantial funds that would immediately go towards bringing some life-altering good news to people that really need it. 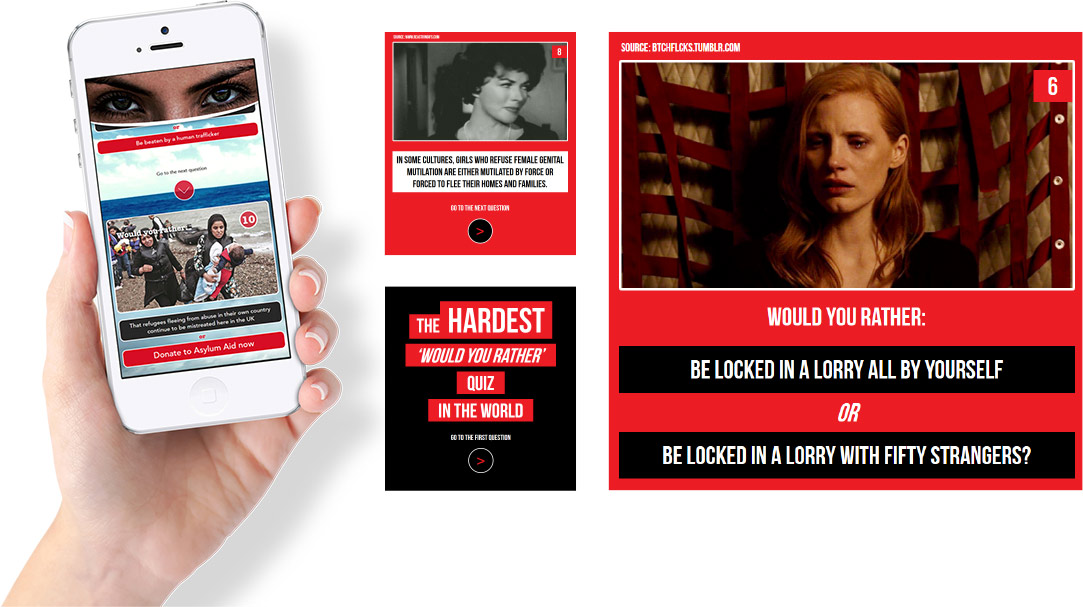