The ins and outs of Ultra-D's glasses-free 3D screen

Screens that magically display 3D with no requirement for the viewer to wear glasses? It may sound like some kind of holographic science-fiction, but in a Scottish first, we’ve been lucky enough to get our hands on a massive 65” autostereoscopic Ultra-D screen that does just that.

So, after putting the technology through its paces in the Multiply Digital Technology Innovation Labs, what did we find?

Well, autostereoscopic 3D displays have been around for a few years. However, the difference in the resolution available on modern 4K screens with Ultra-D’s proprietary algorithms has offered a major leap forward in the capabilities. While viewing angles were extremely limited in earlier HD models, Ultra-D’s screen offers a far wider range of viewing angles. Their award-winning technology generates the required views based on either a 2D + depth-map format, or from a stereoscopic input such as a 3D Blu-ray, and can control the strength of the 3D effect on the fly.

First off it should be noted that this screen, as with most autostereoscopic screens I have seen, is definitely strongest at displaying depth into the screen (positive parallax), compared to typical 3D glasses based systems which can place objects well out in front of the screen as well as into it. So, with this in mind, several animations were created which position objects both deep into the screen as well as in a position well in front of the screen plane, and a mixture of flat planes were tested against full 3D modelled objects. We also tested a commercial 3D Blu-ray to review the results of live action footage in comparison to animated content.

The majority of our test content was created using Adobe After Effects CC 2017 along with Video Copilot’s superb Element 3D plug-in and Cinema 4D. Over and above our specifically created content, we tested the Avatar 3D Blu-ray (obviously) and BearShark 3D, a traditional cell style cartoon which ran on Nintendo’s 3DS Video channel in the US.

Our (non-scientific) findings were that the 3D strength felt reduced when compared to glasses based systems in both live action and animated sequences, with very little content effectively delivering an out-of-screen experience.

In itself, this is not a deal breaker as the simplicity of just watching 3D on a screen without having to don glasses really does make 3D a viable everyday option. The majority of our team gave positive feedback, although, when experimenting with the 3D strength settings, results were more varied with some viewers unable to look at the screen at higher settings. This would be expected as the science behind stereoscopic displays is based on the average inter-occular distance (space between a person’s eyes) which of course varies from person to person. So an individual with closer set eyes would experience the 3D as being stronger than an individual with wider than average eyes.

Overall the display is great for short, attention grabbing moments such as would be required for digital signage, OOH or for use in public locations like visitor centres or museums. The surprise and depth effect of the 3D naturally grabs your attention and holds it longer than typical 2D screens (this is supported by recent research findings*). Although the quality of the image overall is very good it doesn’t deliver the same level of 3D as a glasses based system so, especially for 3D enthusiasts, the screen wouldn’t present the best solution for home viewing of 3D content where a 3D projector or good quality passive or active glasses based 4K screen would deliver a more immersive experience.

Multiply demonstrated the display recently at the Marketing Society’s Digital Day in Glasgow and will be attending the Museum Association Conference & Exhibition in Manchester Central Convention Centre with the Ultra-D screen on 16 and 17 November 2017. Pop over and see us if you’re nearby or check out the video to see what you think?

NOTE: This video is provided in a standard stereoscopic 3D side-by-side format and requires appropriate hardware and/or software to be viewed. Further information on 3D file formats can be located on:

The Power of Social & Shopper Marketing 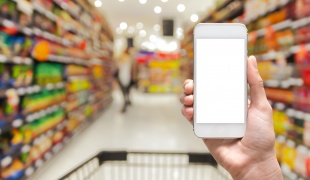